Choosing a baby girl’s name can be a fun experience and you can spend hours looking up different names to call your future arrival.

However, it can also be quite a hard decision to make!

Not only do you have to choose a name that you and your partner both agree on but you’ve also got to choose something that suits a baby and an adult.

I’ve always been someone to like unique names, it’s nice to not follow the crowd and your child not to have the same name as everyone else at school!

It can also be hard if you associate a name with a particular person.

I worked in a nursery for a couple of years and there are names I’m more fond of than others!

Another thing to consider is whether your chosen name can be made shorter, if you like the shortened version and if you’d be happy to call your baby that version of the name.

I’ve been looking up different, modern and unique names that are popular right now.

(but not too popular! or too weird!)

All of these names I personally love and as I’m having a baby girl in a few months I have been having lots of fun looking up names.

I’ve also added a snippet of information about the names to give you a little helping hand in deciding what to call your newborn.

The name Delilah means delicate, seductive, or lovelorn in Hebrew.

Delilah is a woman from the bible who tricked Samson into revealing the secret of his strength which was his long hair. She then betrayed him to his enemies.

The name started to be used in the 17th century and has been used ever since, becoming more popular in the late 2000s.

If your name is Delilah it can mean you are loving, sensitive and compassionate.

It is a pretty girls name and can be shortened to Lilah, Dee Dee, or Dee

Willow is a name of English origin and means ‘willow tree.’

It means slender and graceful, much like the branches of the tree.

The name became popular in the late ’90s after the character in ‘Buffy the Vampire Slayer’ and has risen in popularity ever since.

It can be popular to name your child after flowers, plants, or trees and this name is defiantly one that fits this description.

If someone is called Willow it can mean that they’re practical, dependable, and hardworking. But can also be fun, gentle, and strong just like the willow tree itself.

Shortened variations of Willow are: Lola, Willa and Lolo

The name Honor has been around since the late 1800s but has risen in popularity from 2008 onwards.

It is a Latin name meaning ‘ Woman of Honor’

Shortened variations of Honor can be: Onnie, Onny, Nori

Ada is a name that dates back to the 1800s. It has become more popular in the 21st century from TV shows such as ‘Peaky Blinders’ and ‘old fashioned’ names making a comeback.

Ada is from german origin and means ‘nobility’ or ‘noble’

It is also a variation of the biblical name ‘Adah’ which is one of the first girl’s names mentioned in the book of Genesis.

If you’re named Ada you are a caring, loving person and destined to achieve great things!

It is an alternative name to Ava or Eva.

Primrose is a beautiful unique girl’s name. It is of English origin and means ‘first rose.’ It is one of the earliest spring flowers to bloom.

The name Primrose hasn’t been very popular over the years but has grown in popularity from 2010 onwards.

Other variations of Primrose can be: Prim, Primmie, Rose, Posie.

I love the name Coral and after doing some research it’s not a very popular name.

Which is great if that’s what you’re looking for!

It is part of the ‘jewel family’ in terms of names and is associated with names such as Ruby and Pearl.

It is of Latin origin and means: Semi precious sea growth often deep pink or red.

The name Coral can mean you’re quiet, have attention to detail and have a love of being in nature.

Other variations of the name Coral are: Coco, Cora and Cori.

The name Coraline has shot up in popularity since the 2009 film ‘Coraline.’

However, it still isn’t an overly popular name and is of American origin meaning ‘heart.’

Having the name Coraline can mean that you’re gentle, pleasing, and graceful.

Other variations of Coraline can be: Cora, Coral, Coco, Corrie.

An Opal is a beautiful and colourful gemstone, the Romans considered the opal to be a sign of hope and good fortune.

It is also the birthstone for October.

The name became popular in the victorian era when it became the fashion to name children after jewels.

Having the name Opal means you are hard working, patient and always willing to try new things.

Other variations of Opal are: Opie, Op, Opa.

Pandora is of Greek origin and means ‘all the gifts.’

In Greek mythology, Pandora was the first woman created by the gods, whose curiosity caused her to open a forbidden box that unleashed the evils of the world.

To have the name Pandora means you are caring, compassionate, nurturing and loving.

Other variations include: Pandy, Dora, Ora and Dory.

Eilish is of Irish origin and means ‘pledged to god.’

It is a name that has recently become more popular since the singer Billie Eilish has become famous.

If your name is Eilish it can mean you can be silly, have a good sense of humour and a good person.

Other variations of Eilish are: Lish and Eili.

In astrology, Nova is a star that increases in brightness and then fades after a short period of time.

The name Nova is of latin origin and means ‘new.’

If your name is Nova it can mean your are mystical, imaginative, eccentric and wise.

Other variations of the name Nova are Novie, Nove.

Wanda is a name of Slavic origin meaning ‘shepherdess’ or ‘wanderer.’

If your name is Wanda it could mean you’re independent and intuitive.

In Irish mythology Maeve was a warrior queen, the name is of Irish and Gaelic origin and means ‘intoxicating.

However, I am yet to meet a Maeve and find the name very pretty!

If your name is Maeve it could mean you’re self confident, a natural born leader and highly focused.

Other variations of the name are Mae, Mavis, May and Mia.

Delphi is a rare baby girls name that is of Greek origin from the word ‘delphus’ meaning ‘hollow’ or ‘womb.’

If you’re called Delphi it can mean you’re generous, artistic and creative.

A nickname for Delphi could be DeeDee or Phi Phi.

Mabel has grown in popularity a lot over the past couple of years, but not as popular as it was in the late 1800s.

It originates from the old Anglo Norman girls name ‘Amabel’ and means ‘lovable.’

Possible variations of Mabel could be Mabs or Mabes.

The name Naya is of Arabic origin meaning ‘new.’

It originally comes from the name ‘Anaya’ and is a variation of the name ‘Nadia.’

Its a lovely unique baby girls name that you don’t hear everyday!

Coco can be quite a rare name for a baby but I see it becoming much more popular in the future.

It comes from a nickname influenced by the word ‘cocoa’ and has started becoming more popular as the name is taken by fashion designer Coco Chanel.

If you’re named Coco you’re seen as generous and compassionate.

Alma is a feminine name but historically was used as a masculine name ‘Almo.’

It is of Latin origin and means ‘nurturing soul’ and it’s making a comeback!

The name was originally very popular in the early 1900s dying down as the century went on but today is becoming more popular as old-fashioned names are in right now.

If you’re called Alma you could be seen as a generous individual who is creative, artistic and stylish.

There are many different meanings to the name Mali, some of the meanings are ‘industrious,’  ‘queen’, and ‘flower.

The name as become more popular since the late ’90s but is still quite a unique name in the UK and USA.

If you’re called Mali you’re likely to be self confident, successful and always up for a challenge.

Layla is of Arabic and Egyptian origin and means ‘dark beauty’ or ‘born at night.’

It is a name that has shot up in popularity the past couple of years, especially in the Uk and Australia but is still a name you don’t hear every day.

If you’re named Layla you can be loving, sensitive, creative and family orientated.

Possible nicknames for Layla are: Laylay and Lala.

Flora is of Latin Scottish origin and means ‘flower.’

Flora is the name of the Roman goddess of springtime who enjoyed eternal youth.

If you’re named Flora your personality traits can be mystical, philosophical, friendly and graceful.

Nicknames for the name Flora are: Flo and Flossie.

The name Leena has become more popular ever since the 1960s and is a Quranic Arabic meaning ‘young palm tree’ ‘tender and delicate.’

If you’re called Leena it could mean you’re highly focused and a natural-born leader.

Possible nicknames for the name Leena are: Lee, Len, Nana and Lin.

Cecily is a unique baby girls name and is of Latin and Welsh origin meaning ‘blind.’

The name was particularly popular in the ’80s and died down in the ’90s.

However, it is making a comeback and been more popular over the past couple of years.

If you’re named Cecily it can mean you’re optimistic, inspiring and outgoing.

Possible nicknames of the name Cecily are: Cece and Sissy.

So there you go…. I hope this list of unique girl’s names has been of some help to you and hopefully has brought you a bit closer to choosing your baby name! 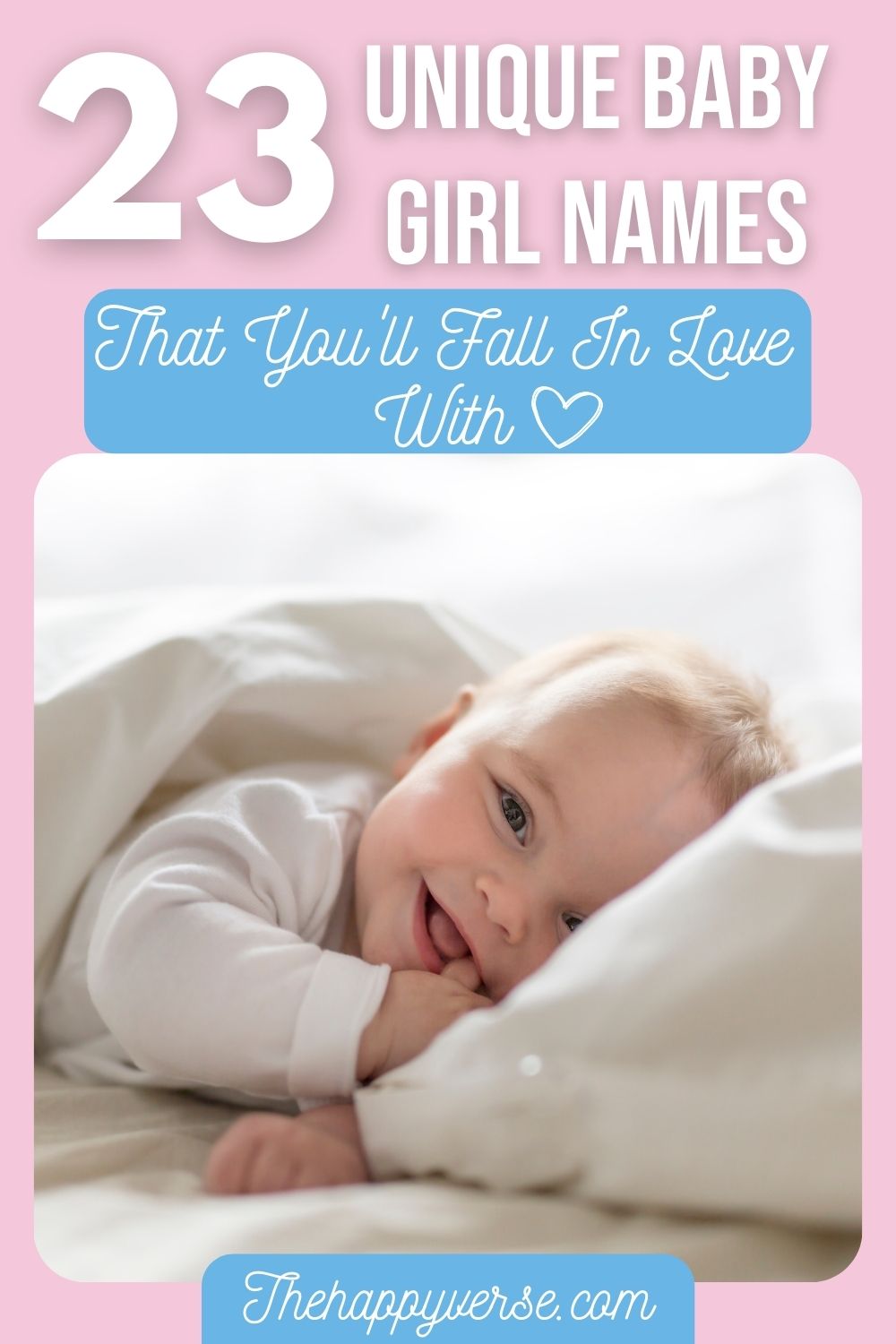 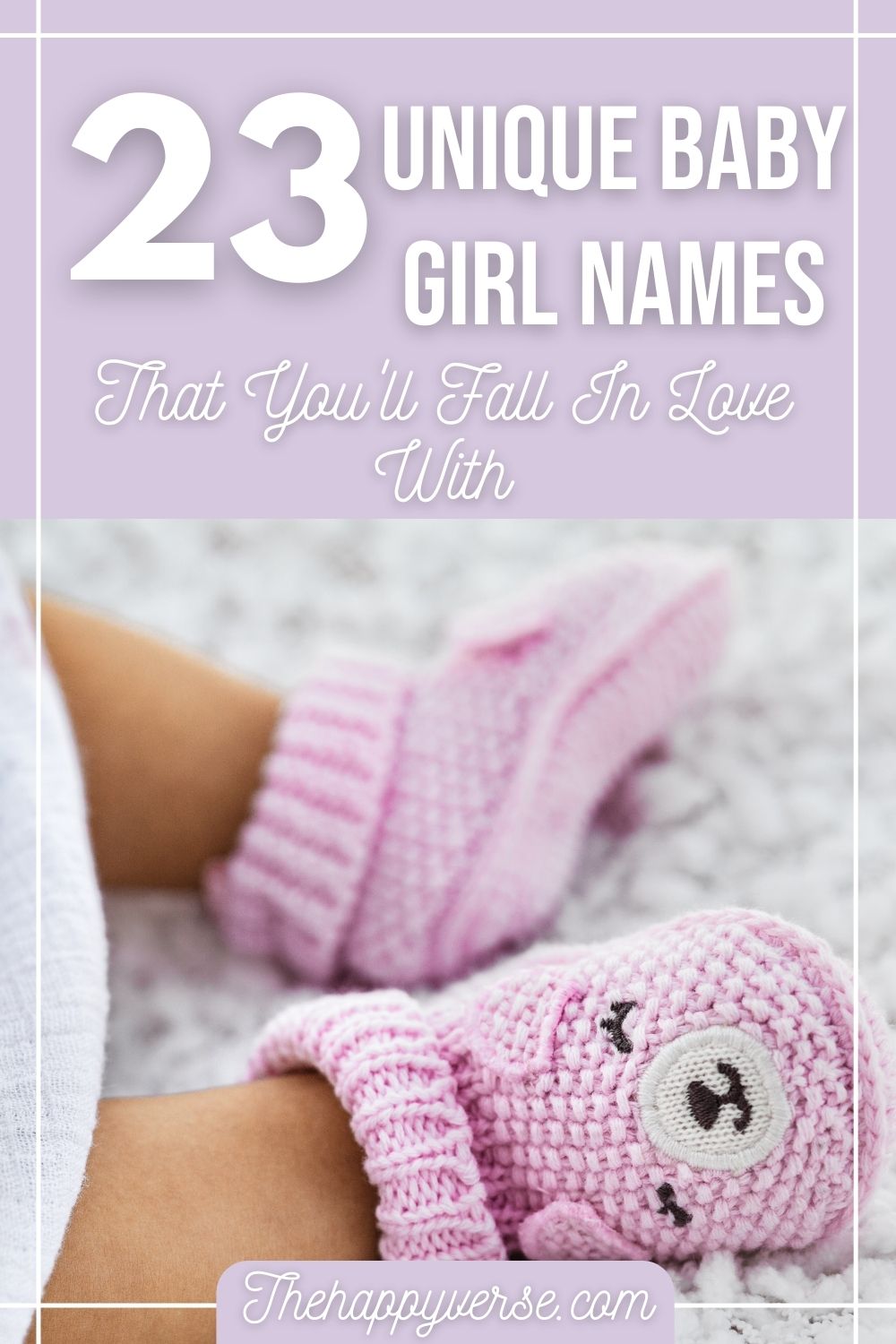 23 Unique Baby Boy’s Names That Everyone Will Love

25 Simple Yet Helpful Tips For Surviving Your...

23 Unique Baby Boy’s Names That Everyone Will...

21 Great Things To Do On Maternity Leave

Welcome to my blog! I live in a sunny beach town called Bournemouth with my boyfriend, son and our cat. I love to spend time with my family, exploring new places, and sitting around in my pj's scrolling through Instagram. I write about our lives, motherhood, and lifestyle tips! Thanks for visiting. ✌️