23 Unique Baby Boy’s Names That Everyone Will Love

When I was pregnant with my son we knew exactly what we were going to call him throughout the whole pregnancy!

However, now I’m pregnant again it’s not that easy!

I’ve recently found out I’m having a girl but have enjoyed searching through the endless lists on the internet and have fallen in love with some of these names and had to share them!

I’ve added my son’s name on here too just for good measure!

I love names that are unique, uncommon, and unusual. I’ve picked out some boy’s names that fit that description.

I’ve listed names that stand out from the crowd, aren’t too ‘out there’ and will suit babies and adults.

Jude is my son’s name so has to be top of the list! And I’ll probably be completely biased about the name.

I love the fact that there is only one Jude in my son’s class and everyone knows who he is because of that!

The name Jude is of Greek origin and means ‘praised.’ It has particularly become popular since 2012.

A lot of people have taken a liking to the name from the popular actor Jude Law and the popular Beatles song ‘Hey Jude.’

If your name is Jude it could mean you’re honest, dependable, creative, and hard-working.

The name Ezra has risen in popularity quite a bit over the past few years but still unique enough that there are not hundreds of little Ezra‘s running around.

People are naming their son Ezra as it’s a ‘fresh take’ of a name from the Bible and not a standard name you would expect that is biblical.

Ezra is a Jewish surname of Hebrew origin and means ‘helper.’

If you’re called Ezra it could mean you’re adventurous, intellectual, and easy-going.

Possible nicknames for Ezra are: Ezzy, Ez and Rah Rah.

I love the name Casper and if I had found out I was having a boy this time around I would have called him this name!

The name is of Scandinavian origin and means ‘bringer of treasure.’

If you’re named Casper it might mean you’re cheerful, friendly, and impulsive.

Nicknames for Casper could be: Caspy, Caps, and Cappy.

Atticus is of Greek, Latin origin meaning ‘from Attica’ which is a region that surrounds Athens in Greece.

The name started to become more popular after the 1960 novel ‘To Kill A Mocking Bird’ in which there was a character called Atticus Finch.

If you’re called Atticus it could mean you’re optimistic, popular, creative, and dramatic.

River is a lovely name inspired by nature, it is of English origin and means ‘stream of water that flows to the sea.’

The name has been around since the 18th century but has risen in popularity since the 90s after the late River Pheonix.

If you’re called River it could mean you’re multi-talented, independent, and generous.

Rueben is a Christian name and means ‘behold a son.’

In the bible, Rueben is one of Jacobs’s twelve sons. It is a name that is rising in popularity as it’s a less well-known name from the bible.

Nicknames given to someone named Rueben are: Rube, Roo, Ben, and Rubi.

Cyrus is a Persian name meaning ‘sun’ or ‘one who bestows care.’

It is a name from the old testament and isn’t an overly popular name which is good if you want something powerful yet unique.

If your name is Cyrus you could be seen as free-spirited, adventurous, and intellectual.

Nicknames of Cyrus can be: Rus and Cy.

The name Fletcher is actually an old English surname and means ‘arrow maker.’

It has become more popular as a first name over the years especially since 2010 onwards.

If you’re named Fletcher you are adventurous, freedom-loving, and sensual.

Nicknames for Fletcher can be: Finn and Fletch.

Rory is of Irish origin and means ‘red-haired king.’

If your name is Rory you’re practical, hard-working, and reliable.

A possible nickname for Rory is: Rorz.

Quinn is a name of Irish origin meaning ‘counsel’ ‘wise’ and ‘intelligent.’

It is most known to be a boy’s name but has started to become more popular as a girl’s name also.

The name became more popular in the 90s and has become more fashionable in recent years.

If you’re named Quinn you can be known to be popular, optimistic, inspiring, and happy.

Nicknames for Quinn are: Q or Quinny.

Boston is a unique name to be used in the UK and more popular in the USA.

It has risen in popularity over the past few years and goes with other place names such as Brooklyn, Dallas, and Paris.

It is of Middle English origin and means ‘town by the woods.’

If you’re named Boston it could mean you’re confident, organized, and a leader.

A nickname for Boston could be: Bo ( very cute and on-trend right now!)

Wolf isn’t a very popular name which is what we’re looking for right?

It is in the ‘animal family’ of names such as Bear and Fox and is of German origin meaning ‘traveling wolf.’

It is a powerful name and can mean you’re gracious, patient, and loving.

A possible nickname for Wolf is: Wolfie.

Bowie is of Irish and Scottish origin and means ‘yellow’ or ‘fair-haired.’

The name Boe has shot up in popularity over the past couple of years and I think Bowie is a cool name that is in fashion but still has a twist!

The late David Bowie has a lot of influence on people naming their babies Bowie and I love it.

If your name is Bowie it means you’re gentle and generous.

Even though it is old, it has become more fashionable and trendy since 2012.

It can also be associated with places such as Camden market in London and the New Jersey city.

Nicknames and other variants of Camden are: Cam, Cammy, Den and Denny.

The name Axel is of German and Scandinavian origin and is a form of the old biblical name ‘Absalom’ and means ‘father of peace.’

It is a very old name but is very on-trend right now but still not popular enough to be common.

A possible nickname for Axel is: Axe.

Sunny is a beautiful upbeat name that could be seen as popular among hippies.

It is of English origin and means ‘like the sun’ ‘cheerful’ and ‘warm.’

A lovely nickname to go with Sunny is: Sun.

How can you ever be dull with a name like Sunny?

Remy is a French boy’s name and has the meaning ‘oarsman.’

It is vastly becoming more popular since 2009 but has been around for centuries.

If you’re named Remy it can mean you’re mystical, wise and eccentric.

Zion is a powerful name that is of Hebrew origin meaning ‘highest point.’

The name is mentioned in the old testament and is a symbolic name for Jerusalem.

It became popular in the late 90s when Bob Marley’s son Rohan Marley and Lauryn Hill named their son Zion.

A possible nickname for Zion is: Zizi.

Legend is a bold choice of name and is likely to set your child on the path of thinking highly of themselves.

How can you not love the thought of being called a Legend?!

It isn’t a necessarily popular name but is rising up in the ranks over the past couple of years.

It is of English origin and means ‘history’ or ‘myth.’

Ivor is a name that was at its height of popularity in 1910 and slowly died down in the 80s.

However, it is making a comeback as a lot of the old-fashioned names are.

It is of Scottish origin and means ‘yew.’

It could mean you’re a natural-born leader and highly focused if your name is Ivor.

A possible nickname for Ivor is: Ives.

Angel rose in popularity in the 90s after the vampire in ‘Buffy the Vampire Slayer.’

However, the name is from the medieval Latin name of ‘Angelus’ and means ‘messenger of god.’

If you’re named Angel it can mean you’re expressive, optimistic, and outgoing.

Loki is from Norse mythology and is the unpopular god of fire, shapeshifting, magic, and illusion, or ‘trickster god.’

Loki is also a character in the marvel Thor comics and is the brother of Thor who is often his enemy.

Don’t let all that put you off though!

Possible nicknames of Loki can be: Ki or Loke.

So there you have it!

23 unique baby boy’s names that are set to turn heads!

People are going to share their opinion of your name choice but that’s what you get with a unique name right?

You want to step out of the ‘norm’ and stand out from the crowd.

Good luck on your journey to finding the perfect name and hope you enjoyed looking through this selection. 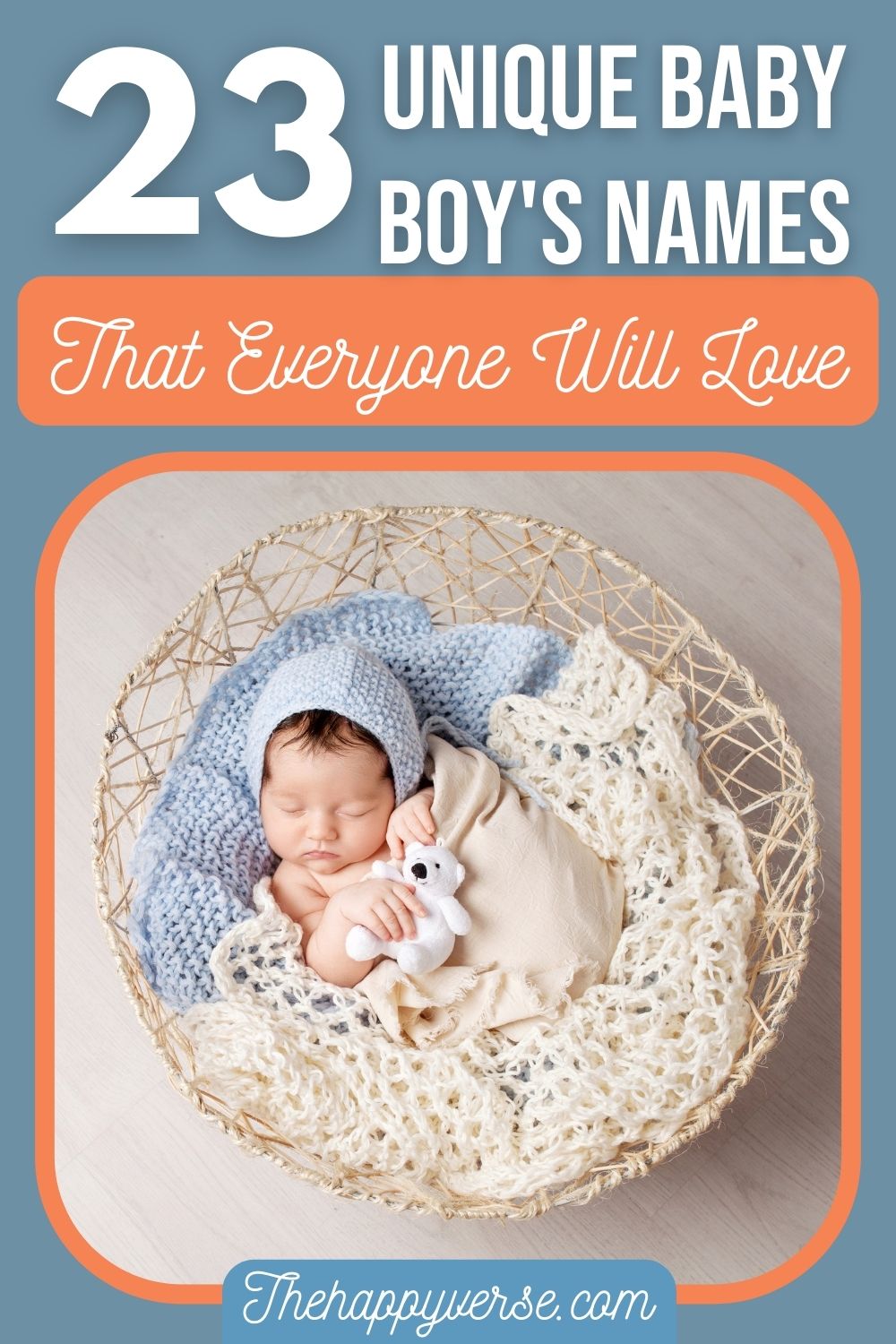 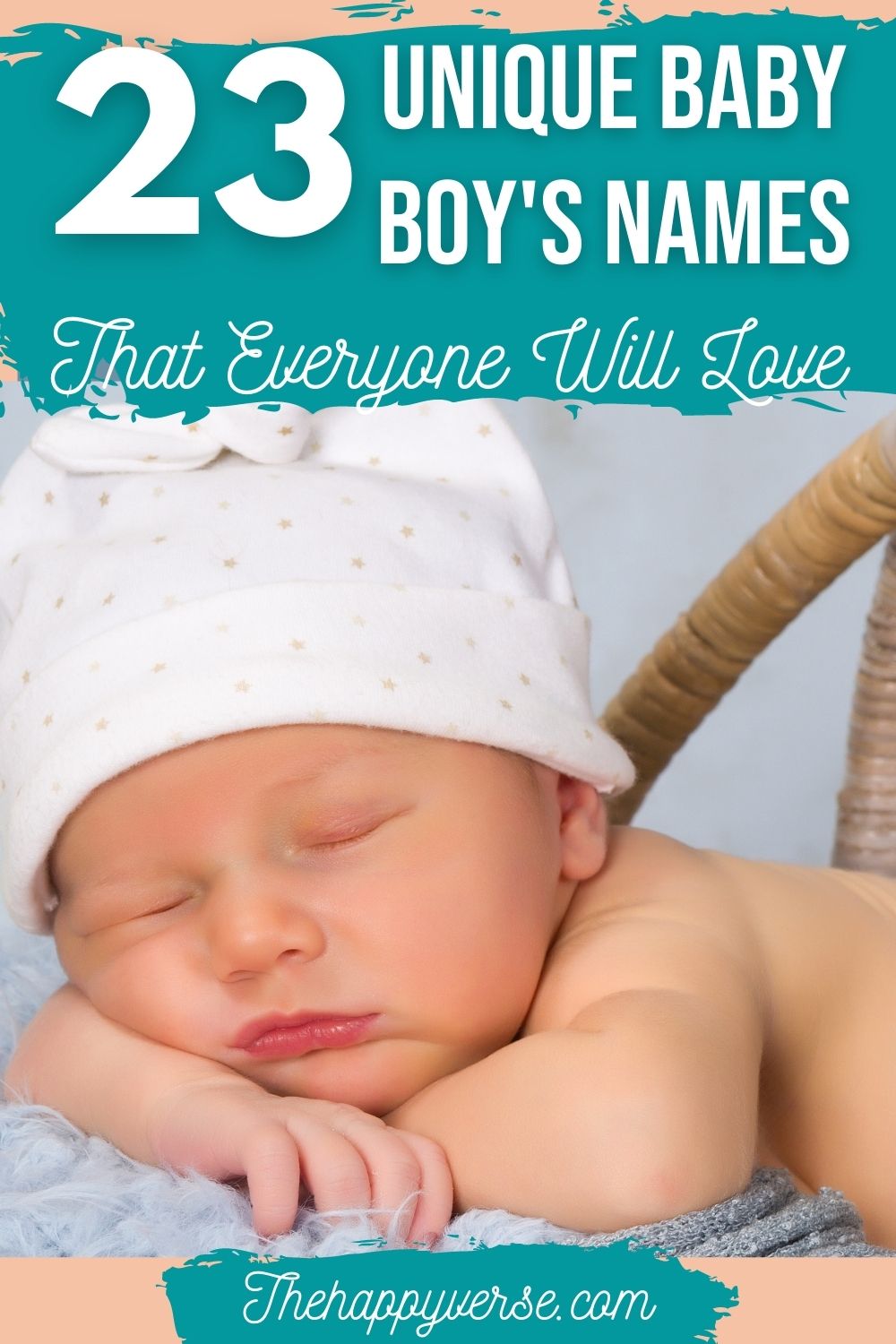 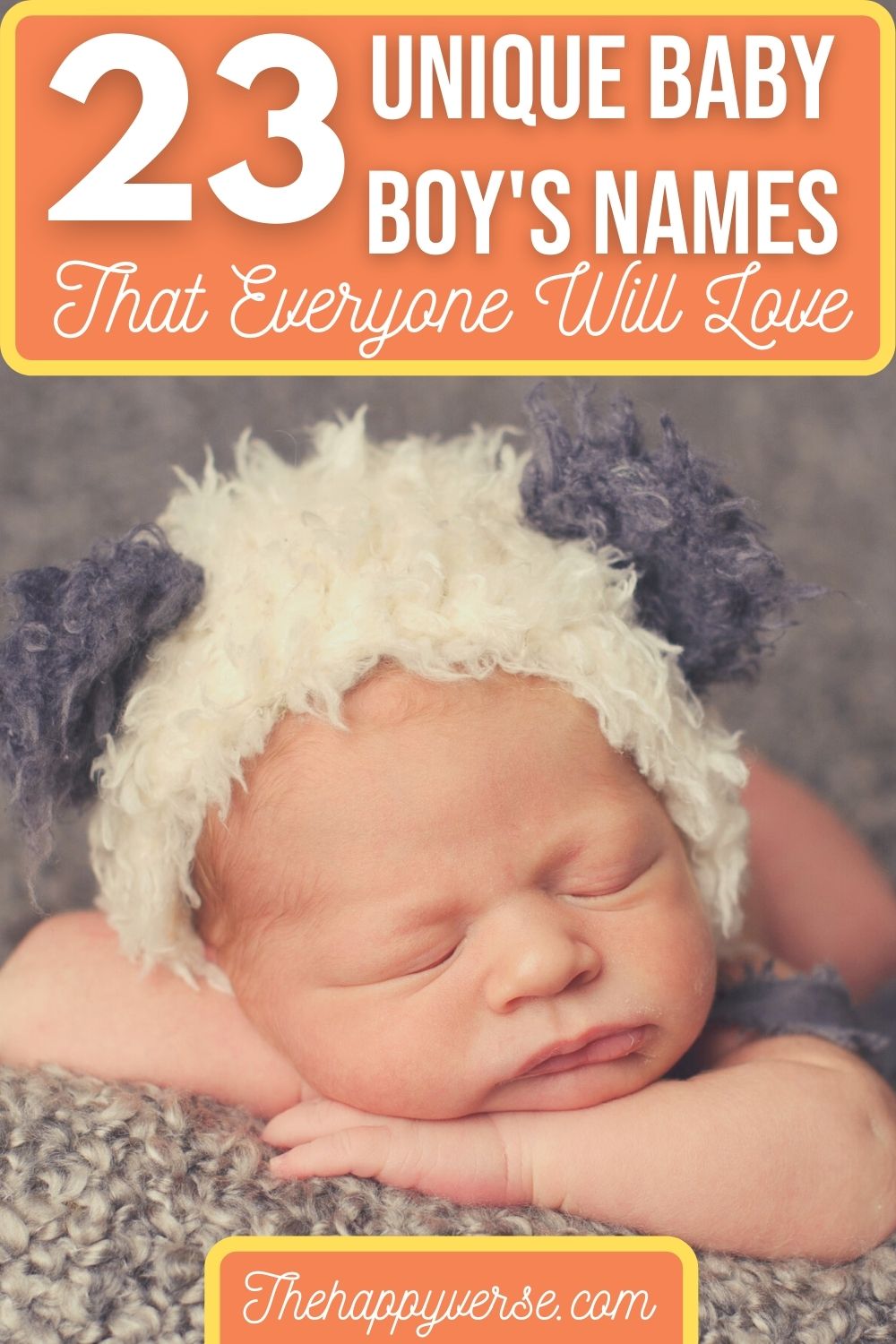 23 Fun Activities For Pregnant Couples That You...

Second Pregnancy Checklist – 31 Items You Can...

25 Simple Yet Helpful Tips For Surviving Your...

Welcome to my blog! I live in a sunny beach town called Bournemouth with my boyfriend, son and our cat. I love to spend time with my family, exploring new places, and sitting around in my pj's scrolling through Instagram. I write about our lives, motherhood, and lifestyle tips! Thanks for visiting. ✌️